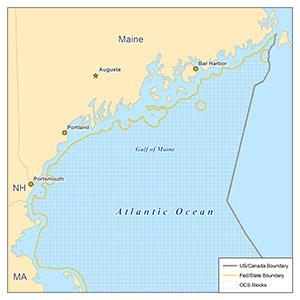 Early this year, BOEM established an intergovernmental offshore wind renewable energy task force. This multi-state collaboration, which includes Massachusetts, Maine, and New Hampshire, met last week at the University New Hampshire with a packed room of over 200 stakeholders. The governor welcomed guests and noted the importance of team work and collaboration in this process and the potential for clean energy, successful economic partnerships, and creating a model for the rest of the country.

During the task force meeting, BOEM explained the process and timeline of events noting that the leasing, siting, planning, and development will take six to ten years to fully execute but the Gulf of Maine has enormous potential for clean energy in the region. Presentations throughout the day included lead energy experts from Maine, New Hampshire, and Massachusetts discussing new technologies in floating turbines, independent transmission assessments, and state initiatives. State leaders encouraged public input early in the process and to communicate what information they need from the states to make educated decisions.

The meeting included presentations from both marine life experts and local fishermen who have genuine concerns on the effects of the ocean habitat and the fish population that is already decreasing due to warming waters. However, the majority of stakeholders cannot deny the enormous potential the Gulf of Maine presents to reducing GHG emissions and transforming the region’s grid.

The energy in the room after a full day felt successful and hopeful. At this time BOEM did not announce a date for the next meeting, but it will take place in either Maine or Massachusetts.