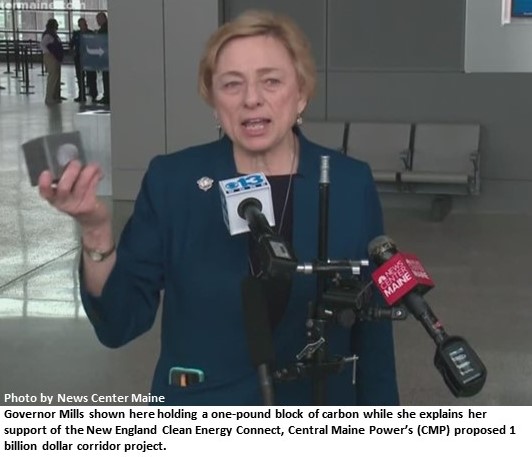 Governor Mills of Maine has officially come out in favor of Central Maine Power’s (CMP) proposed 1 billion dollar corridor project, known as the New England Clean Energy Connect (NECEC), bringing hydro power from Quebec through Lewiston, Maine ending in Massachusetts. This 145 mile transmission line will deliver up to 1,200 megawatts of clean energy to the region. Such interconnection projects have been proposed in the past in accordance with Massachusetts’ Act Relative to Energy Diversity that came out in 2016 demanding 1,600 megawatts of offshore wind with a remaining 1,200 megawatts needed from other clean energy sources.

NECEC will require new construction on 53 miles of forestland running through the largest remaining undeveloped forest in the Eastern United States and commercial forestry areas that have been logged for over 150 years. Those that oppose the plan assert that NECEC favors Canadian energy before local sources and have questioned the environmental impacts of the lines and source of the power itself.

However, the NECEC has received broad support, from leading conservation organizations like the Conservation Law Foundation, Acadia Center; as well as from the Office of Public Advocate, and the Governor’s Energy office. These diverse interest encouraged Hydro-Quebec and Central Maine Power to compromise, address concerns and develop economic and environmental benefits for Maine, and ultimately too, for New England.

Governor Mills noted that, “The agreement today is markedly different from where the discussion started.” With these confident negotiations and group support. Governor Mills came out in support of this project noting that, “Maine is the most heating oil dependent state in the country, with nearly 70% of Maine homeowners relying on oil for their heating needs. We cannot afford to do nothing.” She continued, “By all objective analyses, it will suppress the price of electricity in Maine and in the region, saving Maine residents millions of dollars each year in electricity costs.” In addition a $250 million package was unveiled last week, including $190 million for rate relief.

The proposed project is still under review by Maine’s Land Use Planning Commission, Maine Department of Environmental Protection, and Maine’s Public Utilities Commission. The PUC will continue to hold public meetings on the matter with the next NECEC hearing occurring on March 7th from 9- 5 pm.