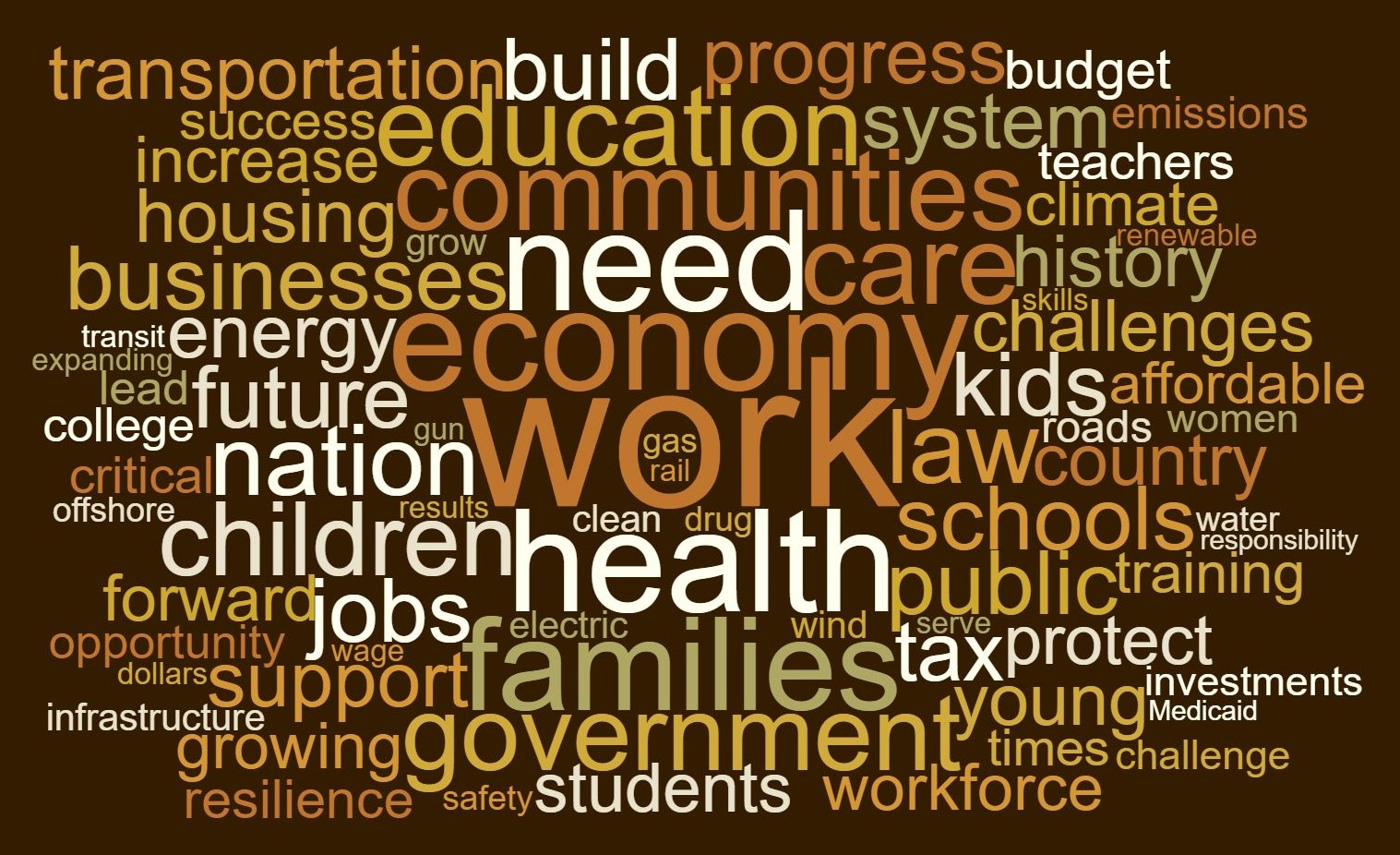 The CONEG Governors have delivered their 2020 State of the State addresses. Highlights of the speeches are provided below including a word cloud illustrating the commonalities among the states.

Connecticut
Governor Ned Lamont delivered his second state of the state on February 5, 2020. In his speech, Lamont touted the progress the state has made on fiscal responsibility, long-term sustainability, and economic growth. “A year ago, I promised we would work together to ensure Connecticut’s future would no longer be defined by fiscal crisis. We made a down payment on that promise by passing an on-time, honestly balanced budget that showed we could live within our means and hold the line on taxes,” said Governor Lamont. Some of Lamont’s legislative proposals for 2020 include a performance-based incentive program for businesses to expand in or relocate to Connecticut; expanding access to capital for small businesses; addressing healthcare costs; modernizing the state’s occupational licensing system; quality education and training; and criminal justice reform. The governor also proposes protecting the climate and environment; enhancing public health and safety; and creating a 21st Century Governance to streamline state government services. Read the speech.

Maine
Governor Janet Mills delivered her second state of the state address on January 21, 2020. During her speech, Mills touted the bipartisan successes of the past year “…without rancor or bitterness.” As Mainers are celebrating the state’s 200th year, Mills is calling on the Legislature to increase the state’s benefit for the families of fallen first responders; she wants to create a scholarship fund to train young firefighters; and she emphasized her three main priorities: health care reform, economic development and combating climate change, and the potential of offshore wind to create jobs, reduce carbon emissions, and save money. “This spring I will visit Scotland to see the offshore wind platforms they are using to supply that country with clean renewable energy. I am determined that the business we once lost to them, we will bring back to Maine. We have great potential. And in the coming weeks, my administration will be taking steps forward to unleash it. Stay tuned,” said Governor Mills.
Read the speech.

Massachusetts
Governor Charlie Baker delivered his fifth state of the Commonwealth address on January 21, 2020. Baker began his speech touting the successes made and outlined his priorities for the coming year. The governor said one of his top goals is to help ease the worst effects of climate change in part by reducing carbon emissions. “Tonight, I’m committing the commonwealth to achieving an ambitious climate goal: net-zero greenhouse gas emissions by 2050,” Baker said. In addition, Baker wants to increase operating funds for the T; reduce the skills gap between better workers and employers; access to high-quality education; build a 21st century health system and put more resources into time with patients, on primary care and behavioral health services, while limiting overall costs increases; working with Northeast and Mid-Atlantic states on the Transportation Climate Initiative; transportation infrastructure improvements; and investing in affordable housing. Baker closed his speech by calling for continued civility. He said, “We’ve demonstrated time and time again over the past five years that we can find common purpose.”
Read the speech.

New Hampshire
Governor Chris Sununu delivered his state of the state address on February 13, 2020. Sununu began his speech touting the economic, educational and environmental successes of the past year and saying the Granite State does things a little differently than other states. “We challenge ourselves to find innovative solutions. We don’t get bogged down like the dysfunction in Washington. We work together — whenever possible — to make sure our state is the best it can possibly be,” Sununu said. The governor presented his proposals including offering additional support to a paid family leave bill; suicide prevention for veterans; pregnancy protections for working women, and Infants in the Workplace Initiative; lowering prescriptions drug prices; and a recap of last year’s investments in environmental, economic and health care. Read the speech.

New York
Governor Andrew Cuomo delivered his tenth state of the state address on January 8, 2020 where he outlined a lengthy list of progressive legislative priorities; over 30 initiatives were released in advance by Cuomo during the last month. Among those include fighting hate crimes “and let’s pass the first-in-the-nation domestic terrorism law to include mass violence motivated by hate, and send the strongest message across this state and nation, New York will not stand by when our people are being victimized and killed by hate,” said Governor Cuomo. The governor also asked for a $3 billion “Restore Mother Nature” bond act, an environmental bill to repair areas damaged by recent floods and protect public lands against future climate damage; legalize adult recreational use of marijuana; cutting taxes for small businesses and boosting a tax credit for sole proprietors or small farmers. Several other proposals include developing high speed rail on the Empire Corridor; expanding the workforce development initiative and building a training center in Syracuse; investing in high tech companies, and many more.

Rhode Island
Governor Gina Raimondo delivered her sixth state of the state January 14, 2020. She touted the progress Rhode Island has made throughout the past five years on economic development, job training and education, and she outlined a long-term vision for the future of the state. Some of Raimondo’s initiatives call for addressing climate change with urgency, and setting a goal of a 100% renewable energy by 2030; improving education for children; strengthening the child welfare system; cutting taxes; improvements to transportation and infrastructure; comprehensive gun reforms; and workforce education. Raimondo is also seeking to make the Rhode Island Promise Scholarship program permanent. The program is set to sunset after this year’s high school seniors go through the program. “Economic experts agree the most important thing we can do to strengthen our economy is to have a more educated workforce. We can’t go backward,” said Raimondo.
Read the speech.

Vermont
Governor Phil Scott delivered his third state of the state address on January 9, 2020. Scott began his speech calling for unity and to rise above partisanship and reject polarization. “Polarization—the “us versus them”—is our nation’s greatest threat. It’s weakening our country and the very foundation on which it was built,” said Scott. Scott noted his biggest concern for Vermont is the growing economic disparity with regards to the aging population – today about 55,000 fewer people under the age of 45 and 44,000 more over the age of 65 than in the year 2000 – calling it a “demographic crisis.” Governor Scott also reaffirmed his commitment to strengthening the cradle-to-career education system; he is proposing expanded afterschool opportunities for all kids; supporting healthy, safe communities through substance use prevention; criminal justice reforms; continue to grow the economy; the Governor proposed investment in affordable housing for working families; combatting climate change; and increased access and incentives for electric vehicles and clean energy storage.
Read the speech.