If there was a buzzword in the environmental community to encapsulate 2019- it would be PFAS also known as Per- and polyfluoroalkyl substances. This class of over 4,700 synthetic organic chemicals have been used irresponsibly by large corporations in several consumer products, including upholstery and food wrapping, and within the industrial setting used as a fire retardant by military and air force bases around the country. Although corporations have been using PFAS in products for decades; the government is now considering actions to protect the environment and its citizens from exposure to these substances. Cancer, high blood pressure, liver damage, and pregnancy complications are just a handful of health consequences from exposure to PFAS. State environmental agencies around the country are detecting PFAS not only in our surface water but in our ground water, our soils and occasionally in our bottled water. 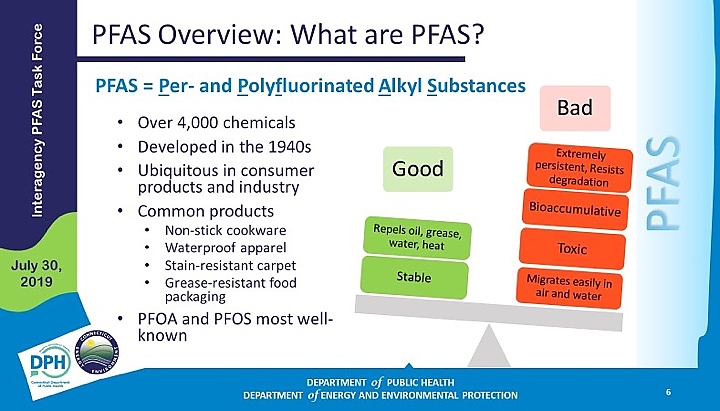 Earlier this year, the Environmental Protection Agency (EPA) responded to this highlighted health threat by developing a PFAS Action Plan. However, criticism emerged as one read through the plan which lacked timelines and funding in order to remove the substance from our environment, specific regulations for the use of PFAS, and any standardized methods for testing these substances. As of today, EPA has drinking water standards for two PFAS chemicals: PFOA and PFOS. Both of which include a maximum contaminant level (MCL) of 70 ppt. Despite concerns and requests for EPA to set stricter MCL’s- the federal government has yet to act and set any new regulations or standards to minimize the risk of PFAS.

It became very clear in the beginning of the year that federal government agencies would take a considerable amount of time to react to the emerging significance of PFAS pollution. In response, congressional representatives and state leaders took charge in the absence of federal guidance. The Congressional PFAS Task Force was developed in the beginning of 2019 with several bills related to PFAS emerging afterwards. These various efforts throughout the year have been working to develop a balanced legislative solution to protect citizen’s health, support state efforts, and gain approval from both political parties.

While federal legislative efforts slowly developed, state leaders took the responsibility to protect the health of their citizens and the environment with urgency. The Northeast Committee on the Environment (NECOE), which is comprised of environmental commissioners from New England and New York, made their demands to the federal government clear with a letter to both the Congressional PFAS Task Force and the House Committee on Energy and Environment. These letters were circulated in June requesting the EPA set a standard MCL, increase testing site locations, demand uniform testing methods, and urge the federal government to reduce the use of PFAS compounds in our economy. State environmental leaders did not stop with just a letter. New England is leading the country in PFAS research, standards, and testing by developing state task forces, state plans, legislative actions, legal proceedings, and setting their own maximum contaminant levels.

Congress is moving toward resolving their differences on which provisions of PFAS should remain in the defense authorization bill and what the federal government’s role will be in paying for site cleanups throughout the country. The House Committee on Energy and Commerce met this week to discuss H.R. 535, the “PFAS Action Act of 2019” which will designate PFAS as a hazardous substance. On November 20, the bill was favorably reported by the Committee, as amended, to the full House of Representatives by a bipartisan vote of 31-19.

It has been a long year discussing PFAS and it is imperative for federal leaders to act now. Consumers are learning more about this substance and concerns are growing. In the next month Hollywood will only shine more light with the release of the movie, “Dark Waters,” which focuses on the chemical manufacturer, DuPont. It is time for federal partners to find a resolution to PFAS and put the health of its citizens above all else. As we move into 2020, I for one would prefer a new buzzword.

Bridging the Gap between Conservation and Energy Advocates: A Historical Leadership Moment