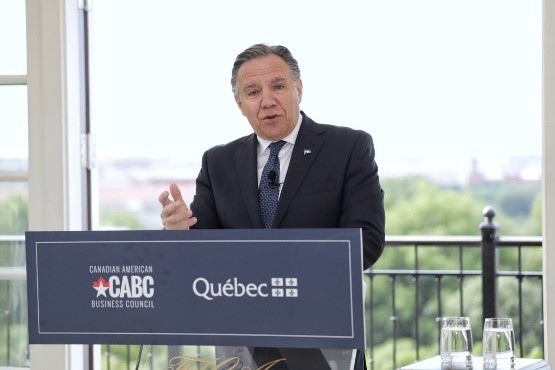 On May 22, 2019, I attended an event with the Premier of Quebec, François Legault. Hosted by the Canadian American Business Council, this was part of Premier Legault’s first official mission to Washington, DC. Focusing his remarks on the economic overview of Québec and its historical connections with the Northeast US, Premier Legault emphasized the importance of trade, private investment, and energy policy.

Premier Legault noted that 70% of Quebec’s exports go to the US, valued at $100 billion per year, making it the 10th largest trading partner. Most of all, Premier Legault touted its energy relationship with the Northeast US. “We’ve been exporting hydropower since 1915, and the past 5 years we’ve provided 25 terawatt hours, annually, mostly to New York and New England.” Highlighting the renewable, low-cost, and battery storage characteristics of hydropower, Legault said even more can be done: “We can double what we are sending to Massachusetts and New York, with current capacity.”

Premier Legault commended Massachusetts Governor Charlie Baker for his engagement and partnership on promoting hydro, as well as a recent announcement with New York City Mayor Bill De Blasio on a potential deal. Legault drew the correlation between hydropower, putting a price on carbon emissions and addressing the crisis of climate change. “The number one thing Quebec can do to fight climate change is provide the Northeast US with more hydro,” Legault affirmed.

Bridging the Gap between Conservation and Energy Advocates: A Historical Leadership Moment