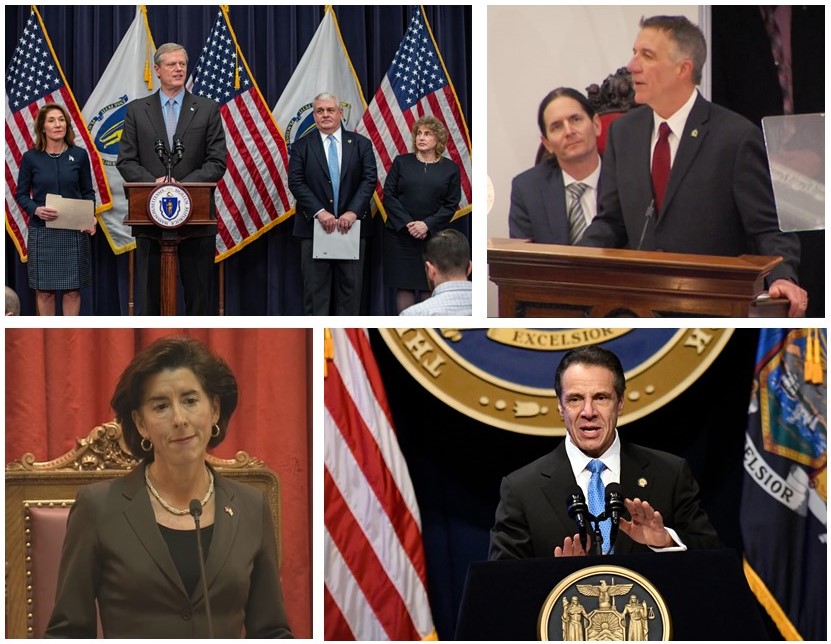 Governors Baker, Cuomo, Raimondo and Scott have delivered their state budget proposals. Highlights of their speeches are provided below. Of note: Connecticut, Maine and New Hampshire have biennial budgets that were approved in 2019.

Massachusetts
Governor Charlie Baker delivered his budget address on January 22, 2021. Baker is calling for a $44.6 billion spending bill with a heavy focus on transportation and education. “This balanced budget will result in the rainy day fund reaching a historic balance of over $4 billion and includes a new tax credit to support individuals with disabilities seeking employment. Our plan fully funds the first year of the Student Opportunity Act and will make critical investments in the MBTA, our transportation system and workforce development to keep the Commonwealth on track to support our booming economy,” said Governor Baker.

The budget is based on the $31.151 billion consensus tax revenue estimate which anticipates a 2.8% growth in total tax collections over revised FY2020 estimates. It includes a $310 million increase to the Stabilization Fund to help provide a buffer for essential government services in the event of a future recession or economic downturn.

New York
Governor Andrew Cuomo delivered his 2021 executive budget proposal in Albany on January 21, 2020, presenting an $178 billion spending plan which includes $105.8 billion in state operational spending, a 1.9% increase over the current year. The governor proposed significant reforms to state Medicaid spending and education aid to localities, the two largest parts of the budget that are expected to grow at 3% each this year.

The plan closes a daunting $6.1 billion projected budget gap, although details remain vague. Cuomo also promoted tax cuts for the middle class and a new tax cut for small businesses. His top line priorities include legalization of adult use of marijuana and gestational surrogacy, passing the Equal Rights Amendment, and reforming the state’s bail reform laws, among many others. “This budget is a roadmap for delivering progressive results for the people of this state and addressing the imminent challenges of our time by advancing social, racial and economic justice. We’re proposing historic investments in climate change and infrastructure programs and fixing the school aid formula to ensure poorer schools get the funding they need,” Governor Cuomo said.

Rhode Island
Governor Gina Raimondo delivered her budget proposal on January 16, 2021. The $10.2 billion state budget plan is the first to exceed $10 billion. In her plan, Raimondo seeks to legalize marijuana and increase the real estate conveyance tax on properties valued at more than $500,000, including several other taxes and fees to help close a $200 million deficit. “We need to stick with what is working – like investing in job training and education, and guaranteeing affordable, quality healthcare for all Rhode Islanders,” said Governor Raimondo.

Some of the highlights of the budget proposal include: no increase on broad based taxes; raises the cigarette tax; making a ban on flavored vaping products permanent, while applying the tobacco tax to other vape products; reinstates sales tax on wine and spirits; applying sales tax to various services; increase state’s hotel tax; increase education funding; increase health and human services spending; crackdown on sick leave abuse and overtime; increase the state minimum wage; makes permanent the free tuition at CCRI; continues the phase out of the car tax; proposes a line item veto; and expands the Real Jobs RI job training program.

Vermont
Governor Phil Scott delivered his budget address on January 21, 2020. Scott’s proposed budget is $6.3 billion with no new taxes or fees, and represents an increase in state spending at roughly 2%. The plan does offer tax cuts for workers, financial incentives for businesses and entrepreneurs, and new money for the tourism economy.

Scott says the plan addresses serious demographic challenges facing the state. “Our demographic crisis is – without question – the greatest challenge we face as a state. Confronting this crisis is the only way we’ll be able to address other critical needs, whether it’s human services, public safety, transportation or climate change and transitioning to a clean energy economy,” said Governor Scott.