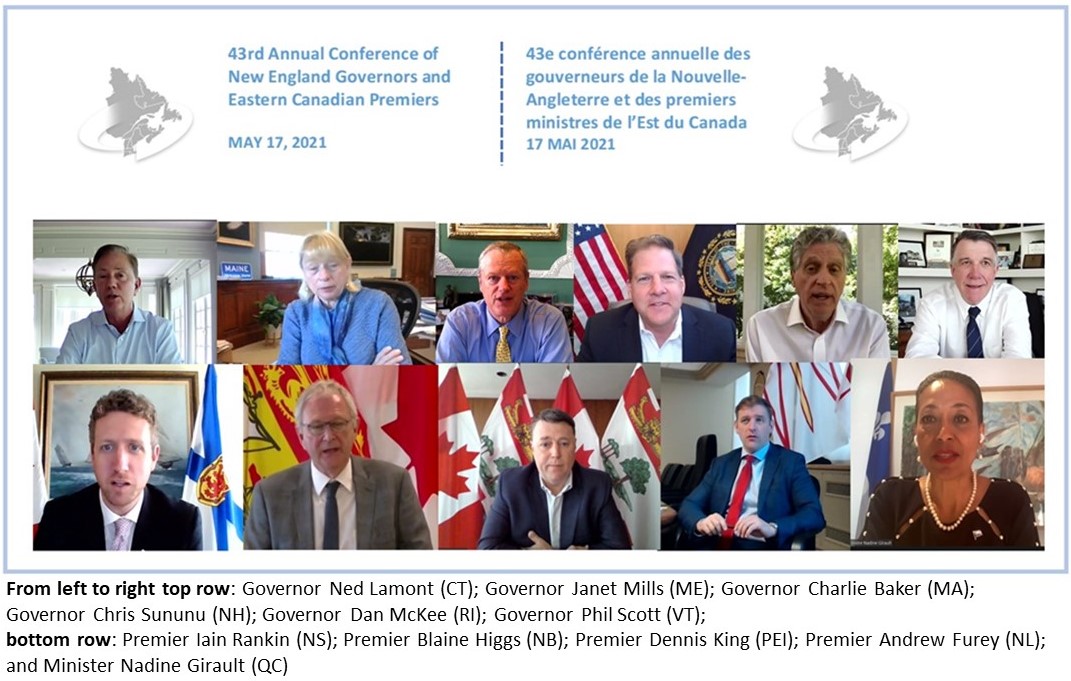 After a two-year hiatus, the New England Governors and Eastern Canadian Premiers (NEG/ECP) met virtually on May 17 to build on their relationship, and they discussed COVID-19 and economic recovery, climate change, and U.S. Canada relations.

A major topic of discussion among Governors and Premiers was coordination on vaccine supply in the region. They agreed to write a letter inquiring about the transfer of surplus vaccinations from the states to the provinces as soon as possible to help expedite reopening their borders. A copy of the letter is available here.

The NEG/ECP has a long, successful history of working together to promote shared cross-border priorities and their closely integrated economies.

In September 2019, Hurricane Dorian swept up the Atlantic over the course of ten days, completing its intense path with landfall over Nova Scotia and Eastern Canada. While Dorian was a near miss for New England, it was the most powerful Atlantic hurricane on record, outside of the Caribbean Sea. Dorian cancelled the New Brunswick conference and serves as a powerful reminder the impact climate change inflicts upon our shared North Atlantic region.

In 2020, Governor Lamont was looking forward to hosting everyone in Connecticut, but clearly state and provincial governments all had more pressing matters across the communities and people they serve in responding to COVID-19, so that conference too was cancelled.

The co-chairs opened the discussion around the importance of collaboration and learning from each other. Governor Lamont expressed his appreciation for the meeting and looks forward to meeting in person next time. He noted it was more effective to work collaboratively as the region plans towards reopening. The governors and premiers shared their experiences and current situations within each of their jurisdictions surrounding the challenges of the pandemic and the economic fallout, particularly from having their borders closed.

“Although we were unable to meet in 2019 and 2020, our collaboration has not stopped, and the work of our communities and our committees has remained ongoing. I want to thank our officials who have helped and continued to work together over the past couple of years to advance our shared priorities. Cooperation between New England and Eastern Canada is more important now than ever, and as we face unprecedented challenges posed by the COVID-19 pandemic, and address climate change,” said Premier Rankin.

“Since 1973, New England governors and Eastern Canadian premiers have met annually to address our shared priorities such as trade, energy security and environmental sustainability. On behalf of my fellow governors, I thank Premier Rankin and Nova Scotia for hosting this important meeting in which we reaffirmed our commitment to cross-border friendship, collaboration, and continued progress addressing the shared challenges confronting our states and provinces, especially as we recover from the COVID-19 pandemic,” said Governor Lamont.

They discussed and touted their efforts to reduce greenhouse gas emissions in the region to below previously set records, while remaining committed to continue dialogue during the transition to renewable energy and clean technology solutions. This includes reaffirming the region’s commitment to meet the target of reducing greenhouse gas emissions 35-45 percent below 1990 levels by 2030. To help achieve this work, Governors and Premiers have asked that the NEG/ECP committees and working groups continue their efforts to advance issues of importance to the region, including renewable energy and clean technology solutions.

During the climate change discussion, Governor Baker said “this topic, in particular, has been the source of a tremendous amount of collaboration, data sharing, and cooperation over the course of my six years as governor. We’ve also done a ton of work with our colleagues in Canada on climate change and energy production.”

Governor Mills touted the climate change blueprint that Maine issued last year. She noted one of the goals is to get 100,000 heat pumps installed to replace oil burners. “Fifty percent of our greenhouse gas emissions is from transportation, so we’re promoting electric vehicles and electric vehicle charging stations,” said Governor Mills.

Governor Sununu appreciated the opportunity to share his experiences and thanked his fellow governors for “doing a really phenomenal job, even compared to the rest of the country.” He also talked about wind in the Gulf of Maine with huge potential, hydro and weatherization. “To all the other Governors, I just want to thank you guys, I never try to miss a chance to say thank you. They’ve just been a tremendous group to work with,” said Governor Sununu.

As Rhode Island’s new governor, Governor McKee thanked his fellow governors for engaging him and believes the regional strategies are very helpful. “I also want to thank Governor Lamont and Governor Baker for taking the time and then having their staff work with our staff to fully understand the Transportation Climate Initiative,” said Governor McKee. He indicated Rhode Island now has legislation in the General Assembly to support the partnership and that is expected to pass.

As part of Vermont’s Climate Action plan, Governor Scott talked about expanding funding for weatherization, continuing to build out electric vehicle infrastructure incentives for consumers to purchase all electric or modern wood systems so they can replace their fossil fuel based systems, investments in storage and lead furcation to soak up renewable over generation, and mitigating flood hazards. “It was great to join my fellow New England governors and Eastern Canadian premiers today to discuss how we can continue our collaboration as we recover from COVID-19. I look forward to working with them to strengthen our economies, revitalize tourism, and combat climate change,” said Governor Scott.

A conference statement was released after the virtual meeting and is available here.

CONEG Governors Deliver Their Inaugural & State of the State Addresses