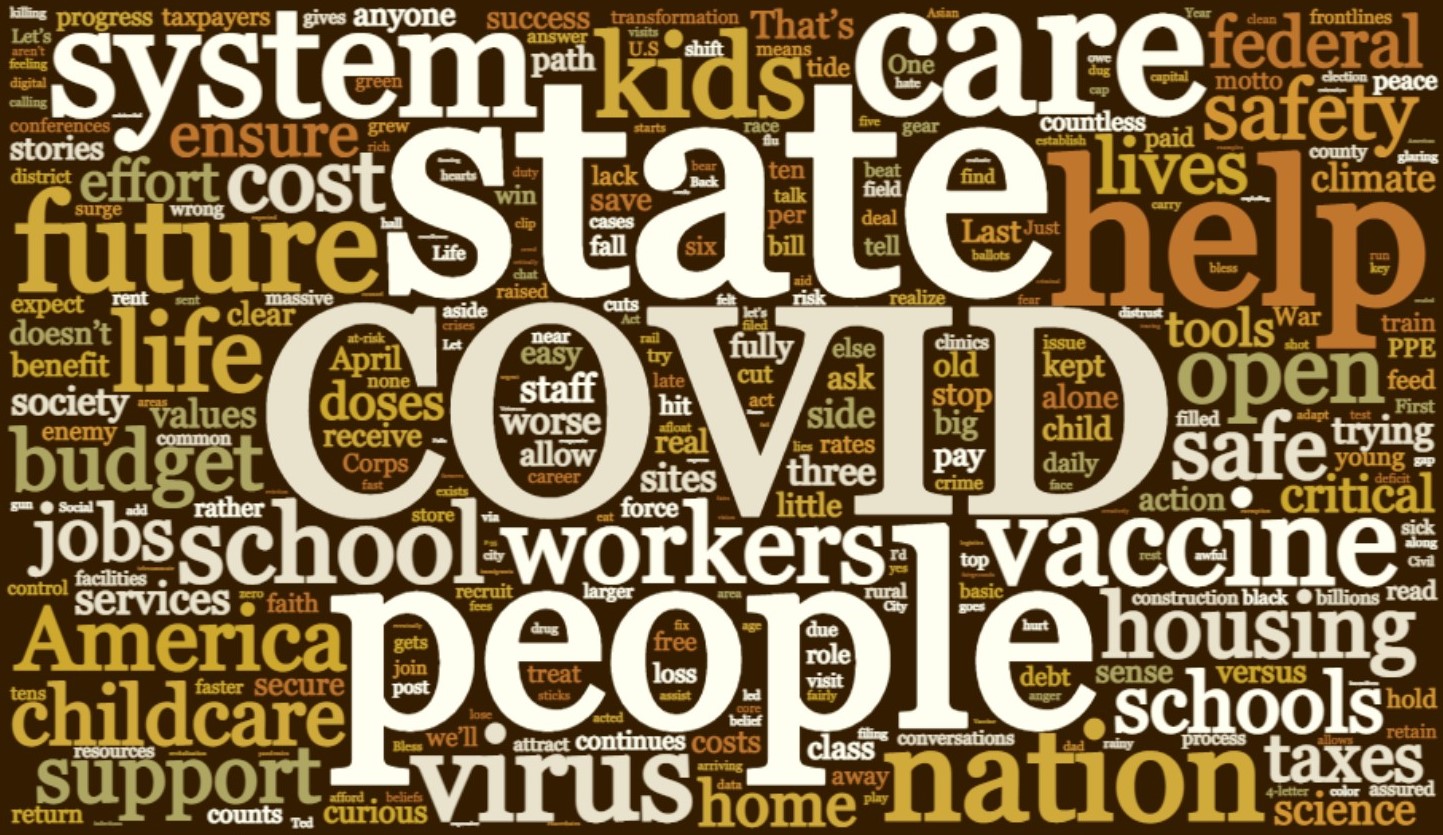 The CONEG Governors have delivered their 2021 State of the State addresses. Highlights of the speeches are provided below including a word cloud illustrating the commonalities among the states.

Governor Ned Lamont delivered his third state of the state on January 6, 2021. Due to the ongoing pandemic, Lamont delivered his speech virtually. In his speech, Lamont thanked the essential workers who are on the front lines of the fight against COVID. “Goodbye 2020 and good riddance, a year that has been the most challenging and humbling… there is a hopeful light on the horizon, our state and our nation are on the mend, and Connecticut’s comeback is happening,” said Lamont. The Governor also stressed the importance of relationships with his neighboring and regional states, and said he would build on those relationships to implement more effective and less expensive solutions, such as faster transportation options which incentivize a move to all electric vehicles, a zero-carbon electric grid, and stronger protections against cyberattacks. Some of the other issues Lamont said he will work on include:  modernizing gaming, legalization of marijuana, racism, affordable healthcare, and many others.

Governor Janet Mills will deliver her third state of the state address in the coming weeks. A summary will be provided at that time.

Governor Charlie Baker delivered his sixth state of the Commonwealth address on January 26, 2021. In his speech, the governor spoke to the troubles experienced by all from the pandemic and the combined efforts of the Commonwealth’s citizens to help combat the crisis, while seeking to reassure the Massachusetts residents that better days are coming. He thanked all the healthcare workers, caregivers, organizations and people helping others. Baker touted his administration’s accomplishments, including one of the most comprehensive police reform laws in the country. He announced a new vaccinations plan. “Everyone has shown tremendous patience throughout this yearlong ordeal and many are justifiably running out of it. I am, too. That’s why this cannot happen fast enough,” Baker said. Governor Baker highlighted measures to reduce the state’s carbon footprint in an effort to address climate change and further investment in transportation.

Governor Chris Sununu delivered his third inaugural address on January 7, 2021. Sununu began his speech thanking NH citizens for placing their trust in him, and also thanking the National Guard and frontline healthcare workers. He spoke about the assault on the U.S. Capitol, and a great deal about neighborliness – Granite Staters looking out for one another, while touting the state’s motto “Live Free or Die.” “It’s naïve and selfish, frankly, to think that Live Free or Die speaks to the individual alone. No, with freedom comes great responsibility of fellowship and of care for one another,” said Sununu. The governor also addressed some policy challenges ahead: namely expanding workforce housing, a streamlined and more efficient government, reducing taxes and growing jobs, public education, and lowering prescription costs.

Governor Andrew Cuomo delivered his eleventh state of the state address on January 11, 2021. Governor Cuomo outlined his 2021 agenda: Reimagine, Rebuild, Renew. He began by expressing his concerns over the pandemic. “We are hurt, we are frustrated, we are in mourning, we are anxious. We are shocked that an invisible enemy could wreak such death and destruction, especially in this, the wealthiest and most powerful nation on earth,” said Cuomo. Governor Cuomo laid out his plan to defeat COVID by announcing the creation of a 1,000 member New York State Public Health Corps to help facilitate a statewide coordinated vaccination operation. Cuomo called for the federal government to boost vaccine shipments to states and urged the Biden administration to release more doses, and he called on Congress to release more aid for state and local governments to aid in state level shortfalls. The governor announced a proposal to boost partial Unemployment Insurance benefits. Cuomo pledged to invest in green energy to help create more jobs, and to increase revenue by legalizing mobile sports betting and recreational marijuana. Cuomo pledged to jumpstart the economy by expanding opportunities in telemedicine, broadband, and workforce retraining as well as commencing the most aggressive construction and transportation development program in the country: new air, road and rail systems upstate and downstate; more affordable housing; and economic development to create jobs.

Governor Gina Raimondo delivered her seventh and likely final state of the state on February 3, 2021. Governor Raimondo’s nomination for U.S. Secretary of Commerce was approved by the Senate Commerce Committee, setting up a confirmation vote on the Senate floor. Raimondo began her speech reflecting on the challenges and tragedy of 2020, and promising Rhode Islanders a brighter future post-pandemic. “Together, we faced challenges and tragedy like never before,” Raimondo said, declaring that 2021 will be “our year of rebuilding.” She touted her administration’s successes over the past six years including her economic incentive programs around commercial real estate, investments in improving crumbling infrastructure, the Rhode Island Promise scholarship program, the country’s first offshore wind farm, and many others. She ended her address with a message to young women and girls. “This world needs you. We need your voice. We need your ideas,” she said.

Governor Phil Scott delivered his third inaugural address on January 7, 2021. In his speech, Scott called for moderation and unity. “The challenges we face demand the very best of all of us, that we rise above the partisanship and division, the pettiness and political games, to commit to the tough work ahead, to get through this crisis safer and stronger, and to do it together,” said Scott. The Governor touted the image of Vermonters coming together to support one another, to care for each other, to light the way out of darkness. Scott talked about the growing economic inequality and the crisis of affordability facing families and businesses, and wants to jumpstart investments and important projects with new tools and commonsense improvement of regulations such as Tax Increment Financing (TIFs). Scott also wants to invest more for the revitalization of homes, helping Vermonters save money and reduce emissions that contribute to climate change. Vermont’s aging demographic also remains a priority. “With an aging population and shrinking workforce, we just don’t have the people we need. Think of it this way: We need more taxpayers, not more taxes,” Scott said.

Governors Condemn Violence at US Capitol

CONEG Governors Deliver Their Inaugural & State of the State Addresses