The CONEG Governors have delivered their 2022 State of the State addresses. Highlights of the speeches are provided below including a word cloud illustrating the commonalities among the states. 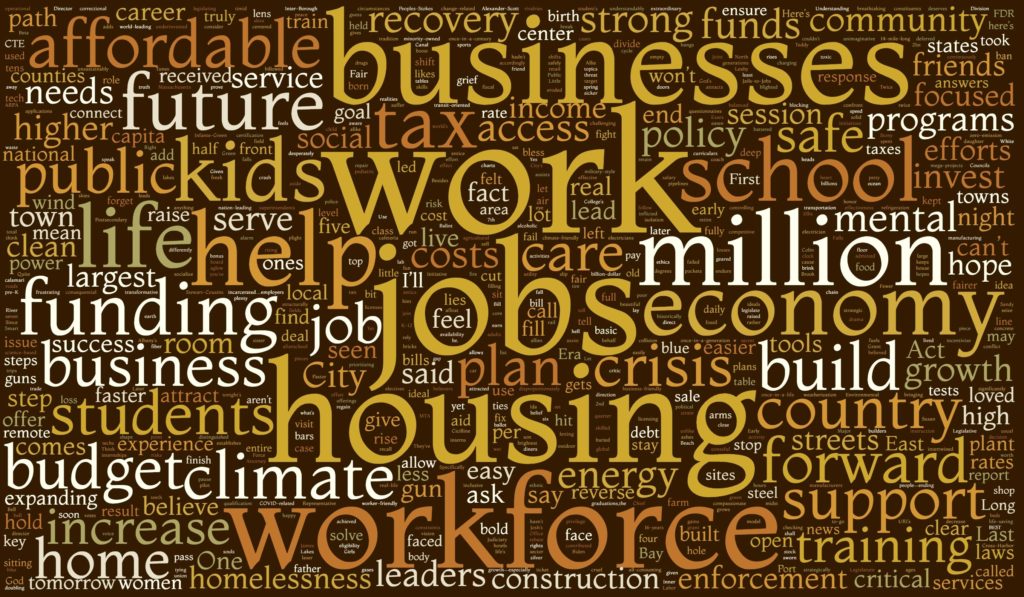 Governor Ned Lamont delivered his fourth state of the state on February 9, 2022. In his speech, Lamont touted his administration’s accomplishments over the past three years, most notably reversing large budget deficits into the third consecutive year of budget surpluses, and expressing his appreciation of everyone who stepped up to help lead efforts fighting the COVID-19 pandemic. “We’re one of the best vaccinated in the country and recently distributed millions of masks and rapid tests, nearly overnight,” said Lamont. Some of the other issues Governor Lamont announced include cutting taxes for working and middle-class families, investing in workforce development, helping small businesses, improving the state’s transportation infrastructure, hardening the electric grid, converting the state fleet to all electric vehicles and building hundreds more EV charging stations, training and hiring additional police, new gun proposals, and public health and safety.

Governor Janet Mills delivered her second state of the state address on February 10, 2022. In opening her speech, Governor Mills touted the progress Mainers have made over the past two years enduring the struggles of surviving the pandemic, and she noted the success of Maine having the third highest vaccination rate in the nation and the fourth lowest death rate despite having one of the oldest populations in the nation. The governor noted that Maine’s Gross Domestic Product grew at the second fastest rate in New England and that Maine’s Rainy Day Fund has more than doubled under her tenure to a record high. She announced that she will give back half of the budget surplus to Maine people. Mills talked about the importance of her Maine Jobs & Recovery Plan to tackling the workforce shortage. “Our workforce shortage is a serious problem. It is a problem I inherited, but it is not one that I will leave to our grandchildren to solve,” said Governor Mills. Other initiatives the governor proposed include making two years of community college free, funding to transform the Opportunity Maine Tax Credit, increasing pay for child care workers and early childhood educators, investing in K-12 education, fully funding free meals, high speed internet, supporting Maine hospitals and nursing homes, and convening a Silver Cabinet to ensure that Mainers may age safely and affordably.

Governor Charlie Baker delivered his eighth and final state of the Commonwealth address on January 25, 2022. In his speech, Governor Baker touted his accomplishments since he took the office in January 2015. Among some of those he listed were fixing the broken Health Connector, the ongoing fight against opioid addiction, increased broadband service to Western Massachusetts, investments in offshore wind, fixing a broken transit system, modernizing local government, and more. He reflected on the challenges of the past two years as a result of the pandemic and praised the people of Massachusetts for helping make the state a national leader in the vaccination effort. Baker also called on lawmakers to vote on two of his long sought public safety bills and releasing plans for several tax breaks. One that provides new protections to domestic violence and sexual assault survivors and another that criminalizes the distribution of explicit images, commonly referred to as revenge porn, as well as legislation addressing the treatment of mental health in the state’s health care system. Baker ended his speech talking about his bipartisan relationships and trust. “We should continue to focus on building and maintaining positive, collaborative relationships. Because they work for the people we serve and it’s what most voters expect from us,” said Governor Baker.

Governor Chris Sununu delivered his state of the state address on February 17, 2022. Governor Sununu opened his address with touting the states success by cutting taxes and reporting record revenues that helped double the state rainy day fund to more than $250 million. He also spoke about his efforts leading New Hampshire during the pandemic. “We knew that the government couldn’t solve Covid, but we came together, cut red tape, and flexed open our health care system to meet our citizen’s needs,” said Governor Sununu. Sununu announced several new proposed initiatives using federal relief dollars, with a $100 million housing incentive fund that includes $60 million in grants to match investments in multifamily housing, $30 million to reward municipalities approving permits within six months, a $5 million demolition grant fund to clear dilapidated buildings, and $5 million in planning grants to update local regulations. Sununu also called for a new veteran’s campus that would include housing, supportive services, a retreat center, true integration of care coordination and therapeutic and recreational services all designed by veterans and military personnel, for veterans and military personnel.