As the pandemic’s economic crisis takes a toll across the country and while additional federal support remains unknown at this time, states are contending with major tax and revenue implications affecting their budgets. State officials are all pushing for Congress and the Administration to approve additional aid for state and local governments. Governor Cuomo and Governor Hogan Call on Congress to Pass $500 Billion State Stabilization Fund in Next COVID-19 Relief Package.

Without federal aid, revenue projections for the states are bleak. 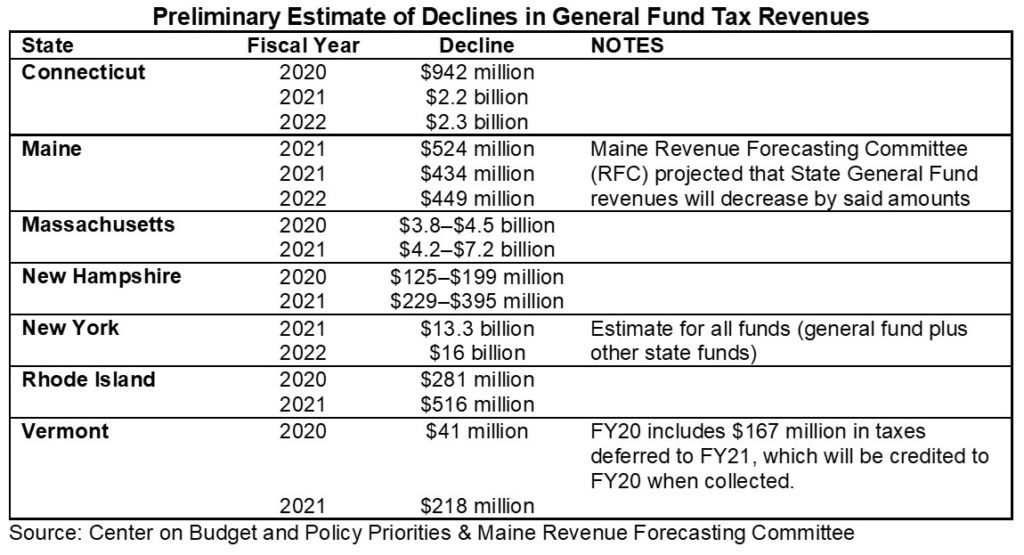 Meanwhile, the latest news from the Bureau of Economic Analysis (BEA) revealed the US Gross Domestic Product (GDP) dropped 32.9% in the second quarter of 2020 – the worst on record. The BEA reports that the GDP in New England dropped 5.2% in the first quarter of 2020, while New York State dropped 8.2%. Second quarter analysis for the states will be published in early October. And to make matters worse, unemployment claims are starting to rise again.

According to the Institute on Taxation and Economic Policy, here is a quick rundown on their revenue projections for some of the Northeast states:

Connecticut
Comptroller letter to the governor reflecting financial statements for the General Fund and the Transportation Fund through May 31, 2020

Massachusetts tax revenue in June down 21.7% compared to last year, according to interim report (MassLive)

New York
Governor Cuomo said a federal proposal to let people pay income taxes where they live if they work from home could devastate the city’s finances, adding to concerns about the state’s financial picture.